I suspect there are more of us out there than we might expect who grew up with parents who had one level or another of preoccupation with what the neighbors might think. There are any number of reasons that happens. None of them are legitimate. Whatever the real reason for neighborly preoccupation was – narcissism, competitiveness, or a convenient way to control the kids – I can assure you that the neighbors really had no healthy reason to be concerned with what you and your family were up to. You didn’t know that, however, and despite the fact that you know that now you still probably have lingering corners of your mind where that message hides.

The key to the freedom we all deserve as adults is to stop caring what other people think. Part of getting to that point may be realizing that nobody is watching, anyway. As kids it was reasonable to think that others were watching us, even if it was only the crabby old guy down the street waiting for us to step on his lawn so he could jump out and start yelling at us. We are adults now, and the old guy is long dead. Nobody is going to scream at us about stepping on their lawn, and even if they do we can handle it. Unless we are sacrificing virgins in the backyard or sword fighting naked with the boys from the golf club, nobody cares.

If you catch yourself with that old feeling of disapproval, I have found the best practice is to refuse to yield to it. If you want to practice your tuba in the front yard but hesitate because you worry about what people think, blow anyway. If you want to go jogging with your shirt off but worry that your belly looks like claymation animation singing the alphabet song, jog anyway. If you want to tell your beads on the front porch but worry someone might think you are a member of the religious secret police, pray anyway. Each time you do it anyway, it will get easier. I promise.

One understanding of the goal of the spiritual life is getting to our true selves. This is a cumbersome task because we spend most of the first half of our lives being told by others both who we are and who we should be. In addition to being profoundly annoying, this practice is doomed to failure because the only one who can discover who we really are is, well, us!

Unfortunately, most of us are way too concerned – especially in the first half of life – about what others think. Unless and until we slow down and begin to ignore others and listen to the still, small voice within, we can’t begin the extensive excavation process that is unearthing the true self.

Most often it requires a crisis or a loss to set us on this journey. Like it or not, life is only too happy to provide us with multiple losses in a seemingly unending attempt to get us started. What’s holding you back? 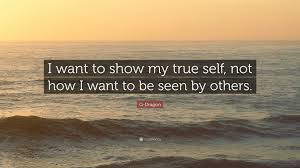 When we are born, we are our true selves. By the time we can communicate, we start becoming someone else so that we can please others. The problem is that our true selves get buried more and more deeply with each presentation of who we imagine others want us to be. The bigger problem is that we will never be happy pretending to be someone we are not.  Nobody can thrive living in a closet.

When I was a child it was quite popular for grown ups to ask children what they wanted to be when they grew up. Over time when that question was asked the adults started to shape our answers. When we were four years old, it was fine to want to be a cowboy. By the time we were twelve the cowboy answer was discouraged if we lived in the city. Gradually, who we wanted to be wasn’t who we wanted to be at all, but rather who everybody else thought we should be.

To move toward reclaiming your true self, the first step is to discover who your true self is. We need to ask ourselves questions like, “What do I want to do right now?” You may well find it’s hard to do that at first, but over time we bet better at it. Eventually we gain enough confidence not only to identify what we want and don’t want, but also to communicate that truth to others. That really is very liberating, and the first step to becoming who you really are!

…is within you. The path is a movement from your false self to your true self.