Oh, the outrage! Jennifer Lopez and Shakira have asses! Son of a bitch! What am I going to tell my teenagers – they don’t know about asses! Not only that, they had the audacity to shake their asses! Jennifer Lopez climbed a stripper pole? How do I explain that to my kids? These women were both dancing as if they were from some sort of Hispanic culture – we can’t have that! Where are Fred Astaire and Ginger Rogers when you need them? We can’t have these brown people running around doing the things they do, or the next thing you know our teenagers will be humping like rabbits (n.b., they already are)! 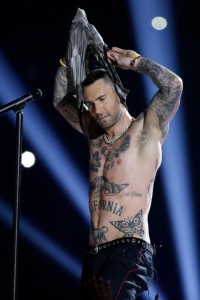 This reminds me of last year when Adam Levine made me uncomfortable by taking off his shirt and moving his hips like a male stripper! Jesus Christ! My kids didn’t know that men had hips! My teenage boys weren’t even sure how they walked, but now I am going to have to explain it to them. Then there was the fact that I went through two Hitachi magic wands trying to get over what I saw!

Okay, ladies, let me help you out. First, there was nothing inappropriate about what either Jennifer Lopez or Shakira were doing. They were dancing, expressing themselves, and just because it wasn’t boring doesn’t mean it was wrong. As for the pole, you can take a class at the local gym or dance studio to learn pole dancing. It’s not reserved for strip clubs any longer, and hasn’t been for some time. Furthermore, if your teenagers have been to homecoming or prom, they 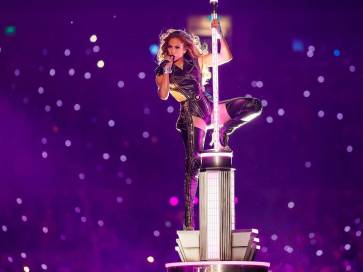 have already been having sexual contact in the backseat of the family SUV – or have you forgotten your youth?

Here’s the real deal. I have a question for you. Why is it you are fine with your teens playing video games in which they kill other people but are upset with them watching two women old enough to be their mothers shake their asses? I will tell you why. It’s not likely because you are a prude, although your reaction proves you are a prude. It’s because somewhere in your past, in a place you don’t want to look at, you have been sexually traumatized and this is triggering you. The problem is neither Shakira nor JLo, nor both or them all lathered up. The problem is that you need to get yourself to a therapist post haste, and no amount of outrage is going to change that truth.