The Puritan streak that remains deeply embedded in American culture would have you believe that morality and your genitals are intimately connected. The resulting attitudes are perhaps among the most unhealthy ones possible. They lead us to see the physical as bad, as somehow distinct from the spiritual and the holy. This view has caused more damage to the American psyche than any other allegedly religious truth, and it is a lie. After all, if it weren’t for genitals, none of us would be here.

Reproduction aside, the problem with a morality that has as its primary focus human sexuality is that it creates a disconnect between human and their bodies. They have a name for people without bodies: dead. We suffer a kind of death when we become disconnected from our bodies. When we start feeling bad about the truth that we need our bodies, we ignore signs and symptoms of illness and disease or – worse – come to see illness as a punishment for being embodied. Many of us were taught there are certain parts of our bodies we should never touch. That kind of teaching leads to some serious hygiene deficits, to say the least.

The truth is that our bodies are a blessing and not a curse. So is our sexuality. Unhealthy attitudes toward our bodies and our sexuality destroy relationships at a frantic pace. Quite simply, there is nothing you can do with your body that is morally wrong as long as any other people who might be involved are able to consent and do so. Those who would rail against “premarital” sex need to realize that marriage as we understand it in America today (as a legal institution in which the State is involved) began in 1913 CE. That means that everyone who has sex prior to 1913 had, by definition, premarital sex. Do you see the problem here?

If your idea of morality is completely defined by your genitals, you have a mighty tiny morality. The things that really damage society and its members aren’t done in the consensual bedroom. War, violence, poverty, hunger, lack of the basic necessities of life, neglect, abuse, pollution, selfishness, greed, hatred, exclusion – these are among the great harms that humans inflict on one another. All of these things become much easier to do when we are disconnected from our bodies and spend most of our time in our often rather distorted thoughts. When we live at a distance from our feelings it can be very difficult to act in a compassionate way. Selfishness follows close behind, and before we know it “genital morality” becomes a very efficient way to distract others from the awful things we do to one another with our clothes on.

The next time you hear someone (even yourself) being critical of our embodied nature, ask yourself what they are trying to hide. Ask why they are so uncomfortable with the bodies we all live life through. Peek into their closets – literal and metaphorical – but step back as you open the door. The odds are that some skeletons will come tumbling out, and you don’t want to get hurt.

On this 4th of July we don’t need any more independence. Americans are obsessed with independence, to the point where it has become a hindrance. We have so perverted the idea of independence that it has come to mean that I can do whatever I want, no matter who it hurts, and everybody else has to deal with it. What we fail to see in all of that is the truth that we need each other. If we didn’t live in a society, we wouldn’t have jobs on Monday because our employers would have no customers. If we didn’t live in a society our trash would simply sit at the curb because we couldn’t come to an agreement with all the other “independent” jackasses to get it collected. The truth is that our “fierce independence” is quite selective and overblown.

Whether we like it or not, we live in a global era. That means we have a global economy. Our businesses have customers around the world, not only around the corner. We all depend on each other, and what we do impacts people way beyond our line of sight. When we act out in ways that hurt those people, we hurt our own best interests. If the corona virus has taught us anything, it should be the truth of interconnectedness. The choices I make and the actions I take during this pandemic may infect other people, who in turn may unwittingly infect others while they are still asymptomatic. Those people may further spread the virus before they become symptomatic. Since very few people are sociopaths who spread this virus intentionally, the process I just described is how we developed a worldwide pandemic – and still Americans want to talk about independence.

We need to wake up. We need to stop championing independence on the one hand and on the other engage in spittle-filled screaming episodes trying to impose our distorted view of reality on other people. As a nation we need to make healthier choices, and we cannot allow people who cannot or will not see the wisdom of those choices to hold us back. In any relationship, as one partner becomes more healthy the other partner or partners are called by the healthy example to do the same. No explicit persuasion is necessary. It’s time for us to grow up as a nation.

It is almost predictable. Watch the White people scramble to purge the record of racism and White Supremacy in America. Scrub the history books and convince yourselves that you have done something worthwhile. No more “Gone With the Wind,” get it out of here so we can pretend that never happened. For the record, I never watched that movie anyway so I won’t miss it, but that’s not the point. Then there is a sketch from “Whose Line is it, Anyway?” that lampooned racist police practices but is now seen as racist because, after all, we can’t have any record of any racism in America! Oh the liberals gather appearing

to want to do something about racism, but in truth what is happening is an attempt to remove the evidence of racism so that we can look good without becoming vulnerable enough to effect actual change.

Country group Lady Antebellum has apologized for having “antebellum” in their name because the word refers to the pre-Civil War south in America, a time in which slavery was legal. They are now “Lady A,” something their fans (who may or may not be able to spell “antebellum”) have called them for some time. There is an unfounded rumor that the name “Fucking A” came in a close second in balloting for the new name, both because of doubts about spelling and a desire to avoid being known as “F-n A,” but I digress.

The point is that when we remove every trace of bad behavior from our memories we become complicit in perpetuating them. Ask you kids if they learned about the Civil Rights Movement in the 1950s and 1960s in school. You may be shocked to learn they didn’t. Ask them if they really know why Martin Luther King, Jr. is important and you may find out your kids believe it’s because streets and plazas are named after him. It’s vitally important that we work to eliminate racism in our society today, but purging records of racism from the past is counter productive and uses energy that would be much better expended in addressing what is happening in 2020! 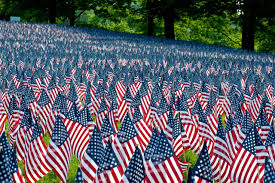 Happy Memorial Day, everyone! In case you haven’t been besieged by this reminder already, today is the day that America honors her fallen veterans – the only kind of veteran America really likes. As you have probably heard, you shouldn’t have too much fun this weekend. We would much prefer you be somber, but do come to the parade and other celebrations! Just remember, this isn’t about picnics and drinking, no! You must have the proper attitude to honor our fallen veterans, because America honors her fallen veterans!

The living ones, not so much.

Oh, sure, they have their special days as well. We have Armed Forces Day coming up on

June 29th, but you probably didn’t know when that day was because we don’t want to make too big a deal about our currently serving military or we might have to face the fact that we don’t pay them a living wage to put their lives on the line for our freedom. New recruits with four months time enlisted make $1681 a month, or $20,171 per year and the privilege of living in base housing free of charge to put their lives on the line for us. That’s roughly $10 per hour, plus housing and health care. Overwhelmed yet? The top of the scale for the highest ranking enlisted person with over sixteen years of service is $69,000 plus a housing allowance and health care. Not exactly a wage that reflects the value one might place in one’s leaders in corporate America, is it.

You might be thinking, we love and take care of our veterans who have completed their service! We honor them on Veterans Day, which gets a little more attention than Armed Forces Day but not quite as much as Memorial Day! What’s more, if they qualify (which they most likely don’t), they can get healthcare free of charge at our completely broken VA system where they will get the privilege of waiting months for substandard care. If you retire after twenty years as an E-6, you’ll even get a pension of $1600 a month. Stick it out thirty and leave as a E-7 and that figure will skyrocket to $2300. Try not to be overwhelmed.

If America really loved her veterans, we would provide them the best healthcare

available – including psychiatric services, free education, low interest loans for housing, and a host of other, much needed services. The problem is that costs money, and the government isn’t really interested in spending money on something so inconsequential as human beings. They have other priorities. They would much rather fund the next war that will create even more veterans we won’t care for or, even better, give corporations tax breaks. If you think that’s too harsh, consider the other highly celebrated memorial day subject – consumer capitalism. Don’t have fun, go to the parade, and then spend money, because if there’s one thing America does love and encourage, it’s spending. So, get out there and honor those who made the ultimate sacrifice so we could get shit on sale.

One last sticky point. Some Americans get all energized over people who kneel or 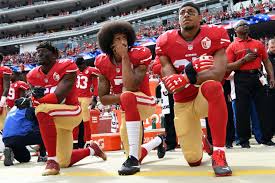 otherwise refuse to stand during the National Anthem. They carry on about how it disgraces the flag and our veterans, sometimes at the very sporting events we ask veterans to stand up at to receive our applause to honor their service and make them forget we really don’t do more than pay them them lip service in return for their service. That Colin Kaepernick and his ilk, kneeling in response to societal injustice and racism, we won’t tolerate that at our Memorial Day celebrations!

Did you know that a veteran commits suicide every sixty-five minutes in America? That our VA system is completely ill-equipped to deal with that, and you want me to get riled up about who kneels during the National Anthem? Maybe those “kneeling bastards” are the only ones who understand!.