There are only a few hard and fast rules in the life of faith. One of them is that you cannot be a person of faith and a racist. The two are mutually exclusive. You can be a person of faith who is working earnestly to eliminate the vestiges of racism in your life. The standard here is not perfection, the standard is progress. If you are in a church on Sunday while believing that some races are inferior to others, you are a hypocrite. Period. No exceptions. Your best course of action would be to skip church and spend your time getting education and attending workshops around racism and issues of diversity.

Some would argue that this kind of absolute statement is inappropriate because it will cause people to stop engaging in discussion. I beg to differ. There are some issues in which there is no middle ground. The majority of issues do have a number of valid viewpoints inherent in them, but some are so important that a middle ground simply doesn’t exist. We have allowed for a middle ground in issues of race in the hopes that people would come around, but in truth the middle ground has been used as a place to hide for far too long. Church leaders may be afraid that if they speak out on issues like racism they will lose members. The truth is that they never had those people to begin 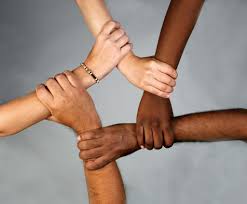 Until we are willing to take a strong stand on issues that frankly cost people their lives every day, we aren’t people of faith. If we aren’t willing to make a meaningful commitment to our spiritual lives, then our spiritual lives have no meaning. If we aren’t willing to say to friends, family members, acquaintances, coworkers, even strangers we encounter on the street or in the grocery store that racist attitude and action are not acceptable, then our faith is gossamer thin and more illusion than substance. If these statements bother you, it’s a pretty strong indication you have some work to do.