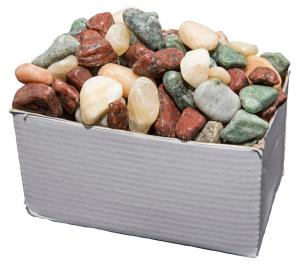 Unfortunately, the last guy was found to be too damn stupid to continue, so we had to replace him with this box of rocks, which has been verified to be a very stable genius with very large hands.

Yesterday, President Trump actually suggested that a light – either inside the body or outside – might cure corona virus. The he suggested household disinfectants, since they 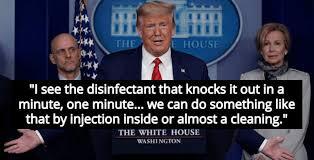 clean surfaces in only sixty seconds, might be injected or ingested as a cure for the virus. CNN suggested that he was reaching for a quick solution. Nonsense. As I watched the video of him making these suggestions to physicians and telling them they should check these things out with medical doctors (does he not know these people are “medical doctors”?), I was struck by the fact that he most resembled a five year old child engaging in magical thinking. This isn’t a man grasping at straws, this is a man engaging in 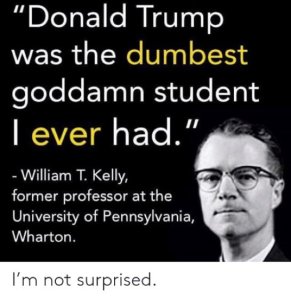 magical thinking at the level of a preschooler and pulling ideas from his intestines.

The truth is that we were warned about his stupidity. The rest of the truth is that a significant percentage of Americans either didn’t believe he was stupid or didn’t see it as a problem. That would be evidence of the stupidity of those people. You may not have to be a genius to be President, but you do have to be able to grab your own ass with both hands. Trump can’t even grab other people’s asses (an easier task), but apparently is proficient at grabbing their “pussy.” The fact that such behavior wasn’t a problem for American voters is evidence of a societal problem of epic proportions. 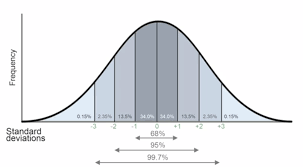 As I have written before, intelligence – like every other naturally occurring phenomena – is distributed across a bell curve. Average intelligence falls in the middle. Half of the people are of above average intelligence and half are below. For every brilliant person you meet, there is an idiot somewhere that balances them out. Currently, one of those idiots is occupying the White House until the above box of rocks arrives to take his place. What do we do about this?

I believe the biggest thing we can do is insist that education is fully funded. No more defunding education to please the wealthy and provide a docile working population. No more encouraging ignorance to please manipulative politicians who want to be able to convince the voting public they have their best interests at heart as they steal their wallets. No more. We need to reclaim our power and demand better from the selfish pricks we have elected to national office. Nothing else will change our situation.