Irony of ironies, now that I have more time for social media, I find that I struggle to tolerate it. With people having more time to post, and posting a lot about the current pandemic, their ignorance is coming to the fore. I find this to be especially true about

millennials, and it has nothing to do with their intelligence. Whether they are smart as a whip or dumb as a box of rocks, it seems they have little idea of how to think critically. Added to their tendency to isolate from the news cycle, what we are left with is a recipe for disaster.

At least in part, it’s not their fault. Our educational system has become obsessed with STEM (Science, Technology, Engineering, and Mathematics). The reason is that corporations say they need more people in these fields, and I believe them. However, in true American fashion, we have exercised little moderation in this effort and so tended to cut what we in the old days would have called a solid liberal arts foundation from our education. This is true not only at the university level, but also in primary and secondary education. We teach to the test, restrict our curricula to so-called common core materials, and teach to the test. To be quite clear, this is the fault not of teachers but of school boards and administrators across the country. What we are left with is technological social misfits who lack common sense.

One result of this is that news is boring, somehow less than important, as so we pay little attention to it. When we do pay attention to it, we don’t go in depth because we don’t find it very important, and so we are easy prey for the misleading headline. When our friends say something it carries as much weight as the New York Times. We “hear” things and pass them along as fact, revealing our ignorance with startling starkness. We don’t stop to think about the impact of passing along what we have “heard” or questionable memes on our friends, as I witnessed on one person’s Facebook page when he passed along a conspiracy meme that was critical of healthcare workers in the corona virus struggle, suggesting they never get sick and so it’s not real. Of course neither assertion is true. He 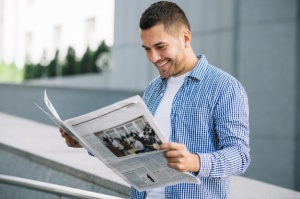 never considered that one of his friends is a Registered Nurse on the front lines of the battle.

The biggest problem in all of this may well be that it cannot be corrected overnight. You can’t just pick up tomorrow’s paper and become well informed. It takes time, and it takes practice. It starts with learning the difference between credible sources and propaganda mills. It continues with implementing a healthy skepticism to everything you hear or read, taking care to look at the source from which it came. This is important because if you aren’t well informed you can’t be a responsible citizen. You simply cannot go to the polls and cast a vote in your own self-interest if you lack the ability to discern which candidate represents that self-interest. This doesn’t take hours each day. Ten minutes a day reading news from a solid source, or listening to it, is a good start. It takes work, and you have to commit to it, but if you care anything about your life and the lives of the next generation, it isn’t optional. In fact, I can guarantee you will feel better about yourself.