Remember this guy? Back in the glory days of televangelism he was simultaneously most successful, most derided, and most criminal of the lot – and there was a lot of competition for that title. In a crude distortion of the Jesus story these con artists claimed to be hawking, was eventually betrayed by colleagues in the televangelism racket and lost everything, going to prison for his crimes. Along the way he had an affair with his surgically enhanced church secretary, who later sold her wares in a skin mag,

You might have thought that would be the end of him in pseudo religious circles, but you

would be wrong. After his release from prison we wrote a book called I Was Wrong, and for a moment I was fooled, thinking he might truly be repentant. He so clearly articulated what he had done wrong and how he found himself in the position to defraud his followers. I ever felt sorry for the little bastard. It seems what he was doing was plotting the next phase of his life – conning seniors in the best place to find them in large numbers, Branson, MO. His message, like his character, has deteriorated even further from his days at the original PTL Club. Characterized by right wing politics and threats of a coming apocalypse, he is the ultimate huckster. Selling everything you can pack into a five gallon bucket to help you survive the coming tribulation – including a five gallon bucket with an attachable toilet seat so you can eliminate your five gallons of broccoli with cheese sauce while remaining in your bunker. The only question that remains would be how to tell the slop he sells from a used toilet bucket.

Now the Food and Drug Administration and the Federal Trade Commission have ordered his to stop selling his latest nonsense that claims to have killed previous versions of the corona virus and so surely will kill this one – complete with a book and DVD, of course. He has forty-eight hours to comply or the fines will begin, no doubt accompanied by his claims of being persecuted. He is the lowest of the low, preying on the very people Jesus told us to protect. Of course, it’s never been about Jesus, has it? Neither for Jim Bakker nor his like in the evangelical, televangelist racket, it has always been about the money.

Have you noticed that televangelists almost never criticize each other? Whether is was 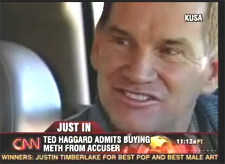 The only reason I can think that a preacher would not be critical of another preacher caught in scandal would be that they all know things about one another that they don’t want revealed. Even a cursory investigation into a few of these people reveals practices that would make Caligula blush. It seems that nearly all of them are profoundly wounded individuals who have spent so much time preaching against the very behaviors that compulsively drive them and have hidden those behaviors behind a code of silence that now compels them to protect one another by maintaining the cover up. The result is that anyone still electing to wade into those waters does so at their own peril – likely at the cost of their bank account.