It seems to me that we have lost sight of a basic ethical principal. I would state that principal as follows: An action is right or wrong independent of the impact of that action

on me. Stated another, perhaps less gentle, way no one of us is the center of the ethical universe. Indulge me as I offer some examples.

If it is wrong to set fire to my neighbor’s house, it is wrong even if he offers to share the insurance money with me. My personal profit is irrelevant in making decisions about right or wrong. Similarly, telling someone at the bar that I am personal friends with Brad Pitt is wrong (unless of course I am), even if telling them that makes it far more likely they might go home with me. It’s wrong to lie, even if it means I stand a better chance of getting laid. This is the same principal at work as in setting fire to my neighbor’s house: My personal profit is irrelevant. Taking this to the employment environment, it’s wrong to lie on my resume or CV even if I think doing so offers a better chance of me getting hired. Again, same principal.

I am afraid that we have come to conflate and confuse several related topics. We have decided that lying by a politician isn’t lying, it’s just “playing politics.” As Shakespeare said, “A rose (or in this case a turd) by any other name is still a rose (turd).” There is nothing about our goal in lying to people that makes lying a moral virtue or even morally neutral. Politics and integrity should walk together, not be opposed to one another. When that’s not the case, the result 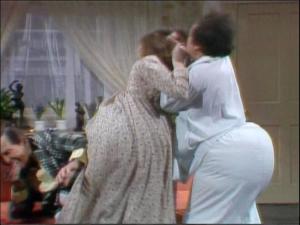 is what we have today in both parties: a highly corrupt system.

The idea that the ends justify the means may have valid applications, but we have pushed it too far and find ourselves left with, in practice, a system in which some believe that if the ends are of value then any means to achieve them are valid. That is absurd. If my wife asks me if a particular dress makes her ass look big and I want to stay married, a nuanced my answer may be justified. If I can make more money by lying about the environmental impact my actions will have, an impact that endangers countless lives, no level of nuance is acceptable. Nuance is okay if it saves marriages and avoids being needlessly cruel, but it’s not okay if someone becomes sick or dies. That should be as plain as the nose on our faces, but we’ve lost sight of it. We desperately need to correct our vision!