We are an extremely competitive society. We can turn anything into a competition – to our detriment, I am afraid. If you can measure it, we can fight over who does it best. If you can quantify it, I guarantee you mine is bigger – unless being smaller is better, but to be honest most males struggle with that concept. You might think that spirituality would be exempt from this nonsense, but you would be mistaken. 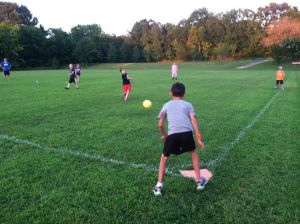 Imagine coming across a group of kids playing kickball and feeling compelled to ask them if any of them are going to play major league baseball or professional soccer. Then imagine none of the kids saying they are going to do either of those things. Would you tell them that they are wasting their time playing kickball and in fact being unfaithful to the higher meaning of playing with their balls? Of course you wouldn’t, but that is precisely what many of those who imagine they are quite far along the spiritual path do to others all the time.

popularized forms of mindfulness in corporate and other non-Buddhist settings as “McMindfulness” because it doesn’t contain the fullness of the Vipassana Buddhist tradition. How is that any different than calling kickball “McBaseball?” Just as some of those kids playing kickball will go on to play more complicated sports, some of the people whose entry into contemplative practice is a popular mindfulness application will go on to deeper spiritual practice. More importantly, those who don’t go on may still have perfectly wonderful experiences playing kickball or practicing mindfulness as a stress reduction technique. None of us has the right to tell anyone else what’s best for them!

Fundamentalism rears its ugly head in many different settings, even on the kickball diamond. What we can know about those people who are only to eager to insist that others “aren’t doing it right” is that they are plagued by insecurities about their own practice and struggling with some significant control issues – both of which are a lot less attractive than a kickball game.