Many people have one or more chronic concerns. These may be things from their personal or health history, newly arisen medical issues, or simply things they worry about. If I had a nickel for every person who described themselves to me as a “worrier,” I’d have a lot of nickels. Other people believe that if they go to the doctor to ask about an issue that’s been troubling them that the doctor might diagnose the problem and then it will become “real.” Children often believe there is a monster under their bed and as long as they don’t look the monster will stay there and not harm them.

Of all the people listed in the last paragraph, only children get a break. It is 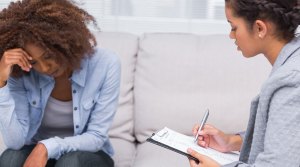 developmentally appropriate for children to engage in magical thinking. Adults, not so much – yet that truth doesn’t seem to stop adults from trying to protect themselves by using magical thinking. That magical thinking is quite harmful, as cancers continue to spread and psychological dysfunctions continue to grow as we hide out for fear that a diagnosis is the thing that makes us sick. Rationally, we know that is absurd (I hope), but our rational minds aren’t always in control. An African American friend tells me that his black friends won’t go to see a therapist because they believe that doing so will mean that they are “crazy.” In truth, that belief reflects a lot more on their mental status than any trip to the therapist ever could.

One thing is certain – whatever the issue might be, waiting to get it checked out doesn’t solve a problem. Suppose nothing is wrong. Would you feel better knowing that? Suppose something is wrong? You will feel better beginning a course of treatment. It’s a no-lose situation. Make that appointment today!