Happy Memorial Day, everyone! In case you haven’t been besieged by this reminder already, today is the day that America honors her fallen veterans – the only kind of veteran America really likes. As you have probably heard, you shouldn’t have too much fun this weekend. We would much prefer you be somber, but do come to the parade and other celebrations! Just remember, this isn’t about picnics and drinking, no! You must have the proper attitude to honor our fallen veterans, because America honors her fallen veterans!

The living ones, not so much.

Oh, sure, they have their special days as well. We have Armed Forces Day coming up on

June 29th, but you probably didn’t know when that day was because we don’t want to make too big a deal about our currently serving military or we might have to face the fact that we don’t pay them a living wage to put their lives on the line for our freedom. New recruits with four months time enlisted make $1681 a month, or $20,171 per year and the privilege of living in base housing free of charge to put their lives on the line for us. That’s roughly $10 per hour, plus housing and health care. Overwhelmed yet? The top of the scale for the highest ranking enlisted person with over sixteen years of service is $69,000 plus a housing allowance and health care. Not exactly a wage that reflects the value one might place in one’s leaders in corporate America, is it.

You might be thinking, we love and take care of our veterans who have completed their service! We honor them on Veterans Day, which gets a little more attention than Armed Forces Day but not quite as much as Memorial Day! What’s more, if they qualify (which they most likely don’t), they can get healthcare free of charge at our completely broken VA system where they will get the privilege of waiting months for substandard care. If you retire after twenty years as an E-6, you’ll even get a pension of $1600 a month. Stick it out thirty and leave as a E-7 and that figure will skyrocket to $2300. Try not to be overwhelmed.

If America really loved her veterans, we would provide them the best healthcare 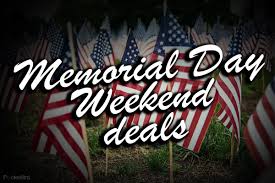 available – including psychiatric services, free education, low interest loans for housing, and a host of other, much needed services. The problem is that costs money, and the government isn’t really interested in spending money on something so inconsequential as human beings. They have other priorities. They would much rather fund the next war that will create even more veterans we won’t care for or, even better, give corporations tax breaks. If you think that’s too harsh, consider the other highly celebrated memorial day subject – consumer capitalism. Don’t have fun, go to the parade, and then spend money, because if there’s one thing America does love and encourage, it’s spending. So, get out there and honor those who made the ultimate sacrifice so we could get shit on sale.

One last sticky point. Some Americans get all energized over people who kneel or

otherwise refuse to stand during the National Anthem. They carry on about how it disgraces the flag and our veterans, sometimes at the very sporting events we ask veterans to stand up at to receive our applause to honor their service and make them forget we really don’t do more than pay them them lip service in return for their service. That Colin Kaepernick and his ilk, kneeling in response to societal injustice and racism, we won’t tolerate that at our Memorial Day celebrations!

Did you know that a veteran commits suicide every sixty-five minutes in America? That our VA system is completely ill-equipped to deal with that, and you want me to get riled up about who kneels during the National Anthem? Maybe those “kneeling bastards” are the only ones who understand!.